Founded in 1866 near the confluence of the Arkansas and Purgatoire Rivers, Boggsville became the first permanent settlement in southeastern Colorado. Its residents pioneered irrigation and large-scale farming and ranching in the Arkansas Valley.

The town flourished for a few years. In the 1870s, Boggsville declined when the railroad arrived a few miles away in Las Animas, which became the county seat.

After a restoration effort in the 1990s, Boggsville now operates seasonally as an interpretive museum and has been named a National Treasure by the National Trust for Historic Preservation. 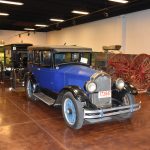