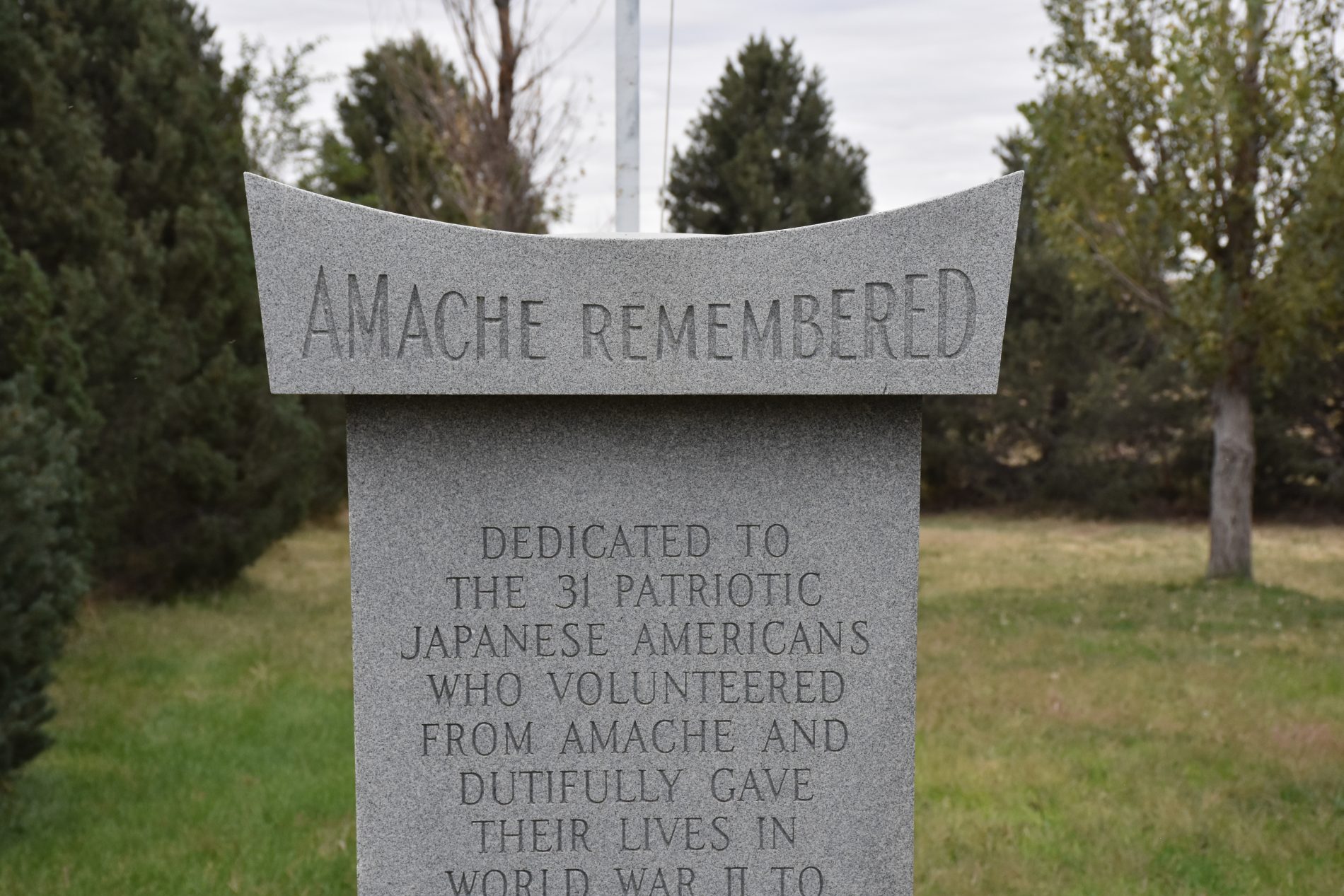 With the recent National Historic Site designation of Camp Amache, located in the town of Granada in Prowers County, Colorado, the Prowers County Lodging Tax Panel board members were interested in developing a library of content to support promotion of Prowers County as the hub for visiting Amache and other cultural, historic and outdoor recreation sites throughout the region.

Prowers County determined through its Restart Destinations workshop that preparing for Amache’s entry into the National Park Service system was a priority.

This content is intended to guide the Prowers County Lodging Tax Panel and its partner agency in publishing stories and information about Amache over the course of the next few years as the Amache site becomes a National Historic Site.

Construction of Amache began in June of 1942. “When completed the camp area covered one square mile and consisted of twenty-nine “blocks’ of barracks, administration buildings, and storage areas. Each block consisted of twelve 120′ x 20′ tarpaper-roofed, Army style barracks. The barracks were divided into six apartments varying in size from 16′ x 20′ to 24′ x 20′. Each individual apartment was equipped with a coal-burning stove, Army cots, one light bulb in the center of each room, and a pad or blanket. The barracks were arranged so that six of them were situated on either side of a community mess hall, public laundry, and bath building. Each block also had its own recreation hall, a 20′ x 100′ rectangular building.” Source: https://amache.org/amache-construction/

John Prowers, the rancher for whom Prowers County is named, married Amache, the daughter of a Cheyenne Indian chief. The Granada Relocation Center became known as Amache when the Post Office mixed up mail between the town of Granada and the Granada Relocation Center. While many people refer to the center as Camp Amache, as these relocation centers functioned as concentration camps for Japanese Americans, detainees and their descendants prefer Amache.

If it had been a town, Amache, which had schools, gardens, a post office, sports fields and medical facilities, would have been one of the tenth largest towns in Colorado when it was operating.

President Biden signed the Amache National Historic Site Act March 18, 2022, designating the Amache site in Granada, Colorado, as part of the National Park Service system. This designation will permanently protect the site for future generations and will help tell the history of Japanese American incarceration during World War II. Camp Amache will be the 424th park in the National Park Service system.
Source: https://amache.org/amache-preservation-society/

What does the National Historic Site designation mean for Amache?
Amache now becomes eligible for federal assistance to enhance the significant volunteer efforts and grant funding that have gotten Amache to where it is today. The volunteer work has been led by John Hopper and Granada High School students through the creation of the Amache Preservation Society. The National Historic Site designation means that Amache, along with its history and its legacy, will be preserved in perpetuity.

According to Hopper, interest and inquiries into Amache have already increased significantly since the bill was signed by President Biden. The Amache Preservation Society is anticipating an increase in visitors as early as this summer. Visitation could increase to up to 30,000 to 40,000 visitors annually once Amache receives its official designation. At that point, Amache will be added to existing National Park Service materials such as maps, brochures, passport programs, and more, further promoting the site and the region.

John Hopper and the Amache Preservation Society will continue to work closely with the National Park Service to help ensure the site is preserved in the manner that reflects the desires of the detainees and their descendants. The Amache Preservation Society hopes to see improved maintenance of the site and existing structures, enhanced interpretive signage and generally more TLC.

There are a few options for visiting Amache. In order to fully understand Amache and its history, the impact on the detainees and the local community, the stories of survivors and their descendents and much more, it is highly recommended to schedule a tour at the Amache Museum first. During the summer months, the museum is open five days a week and staffed by Granada High School students. These students are incredibly knowledgeable and devoted to accurately telling the history of Amache through the experiences of the detainees. They are dedicated to preserving the legacy of the 10,000 Japanese Americans who were detained at Amache. The current students involved with the Amache Preservation Society are often siblings and children of the first students to take on this project with John Hopper back in the 1990s.

Note: During the school year, appointments for the museum must be made in advance.

Visitors who prefer to explore Amache on their own can download a driving tour and maps from the Amache Preservation  Society website: https://amache.org/driving-tour-map-podcasts/

Amache hosts an annual pilgrimage for former detainees and their descendants every year in May. Due to the Covid-19 pandemic, the pilgrimage did not occur in 2020 and 2021. The 2022 pilgrimage took place on May 21st. Over 100 people attended, which included a visit to the Amache Museum, ceremonies at the Amache site and a potluck luncheon held at the high school.

John Hopper was given a Commendation Award from Yoichi Makami, Consulate General of Japan in Denver, for his work on behalf of Amache. Four students from Granada High School were awarded scholarships from Calvin Taro Hada, President of Nikkeijin Kai of Colorado.

If you are searching for a loved one or ancestor who was housed at Amache, the University of Denver has an interactive website to help you look up which barrack in which they were housed.

Many Granada High School students were at the state track meet in Denver on May 21, where Denver was in the midst of a massive spring snowstorm. The students were unable to make it back to Granada to support the pilgrimage. John Hopper said approximately 30 former students showed up to help manage the event. This from a high school of 61 current students.

Community at the Heart of Prowers County

Story 1 Headline: Community at the Heart of Prowers County

The recent designation of Amache as a National Historic Site could not have happened with the dedication of Granada High School students and their teacher, Mr. John Hopper. Hopper introduced the Granada Relocation Center, aka Amache, to students through his history curriculum starting 30 years ago. When many in the town, and the country, wanted to forget this shameful part of history, Hopper recognized the important lessons Amache and the internment of Japanese American citizens during World War II not just alive, but in the forefront. The lesson resonated with students who took on restoring artifacts from Amache, interviewing detainees, and developing tours, presentations and interpretive signage at the site. Through the work of Hopper, the students, and members of the Amache Preservation Society, the site is now part of the National Park Service.

We welcome you to our corner of Colorado where you’ll be challenged by history, awed by beauty, and inspired by our strength, perseverance and determination to build a beautiful future based on community.

Examples of beauty and resilience can be found throughout Prowers County, but one recent example from Amache reminds us all that beauty can be found where, and when, you least expect it.

Rose bushes were found growing near a barracks foundation at the Amache National Historic Site, formerly known as the Granada Relocation Center. Research is still being conducted, but it is believed that the bushes were planted between 1942 and 1945 by Japanese American detainees of the camp. The barracks where the rose bushes are growing was inhabited by detainees from the Los Angeles area. Local expert and founder of the Amache Preservation Society John Hopper believes the bushes were planted next to the barracks as a rain shed since the area receives very little moisture.

The rose bushes are still growing 80 years later, but to everyone’s knowledge, have never bloomed. Cuttings from the rose bushes were sent to the Denver Botanic Gardens in the hopes that they will grow and bloom under careful care and supervision by the experts. Speculation arose as to what the flowers would look like if and when they finally bloomed, what size and color they would be.

While all eyes were on the carefully cultivated bushes at the Botanic Gardens, a tiny, hearty, pink flower blossomed at the original site of the bushes at Amache. 80 years after its planting. And, on the weekend of the annual pilgrimage to Amache by detainees and their descendants.

We invite you to explore the surprising, resilient and unspoiled beauty of Prowers County.

Perseverance in the Pursuit of Preservation

Story 3 Headline: Perseverance in the Pursuit of Preservation

John Hopper is widely credited with leading the effort to preserve Amache and to secure its designation as a National Historic Site and its inclusion in the National Park System. A history teacher turned administrator at tiny Granada High School for over 30 years, Hopper and his students have led the charge to restore Amache in accordance with the wishes of the former Japanese American detainees and their families. He is grateful to have the resources of the National Park System to help the Amache Preservation Society restore Amache, but draws the line when it comes to the artifacts housed at the Amache Museum. When Hopper learned that many of the artifacts would be sent to a repository in Arizona, he was adamant that the Amache Museum and all of its carefully curated artifacts remain under the ownership of the Amache Preservation Society.

Hopper and his students are dedicated to telling the history of Amache through the stories of the Japanese American detainees and their descendants.

We invite you to visit Amache and Prowers County, where you see countless examples of perseverance, determination, and dedication along with genuinely warm welcomes.

A Bright Future from a Dark Past

Story 4 Headline: A Bright Future from a Dark Past

With the designation of Amache as a National Historic Site (NHS), the future looks bright for Granada and Prowers County. It is estimated that 30,000 to 40,000 people will visit Amache once it is under the umbrella of the National Park System. This adds to the numerous historical and cultural sites of significance in and near Prowers County, such as the Sand Creek Massacre National Historic Site, Bent’s Old Fort, Bent’s New Fort, the Santa Fe Trail and many others. So what does this mean for the community?

John Hopper, the Granada High School history teacher credited with leading the effort to restore Amache and achieve the NHS designation, hopes the benefits will be many. In addition to the professional support and financial resources the designation brings, he hopes the increased awareness will bring economic benefits to the area as well.

“There used to be a bed and breakfast in Granada, I’d love to see something like that return, along with a hotel and other businesses,” Hopper said.

Rick Wallner, President of the Canyons & Plains Regional Heritage Taskforce believes the inclusion of Amache in the National Park Service system will draw increased awareness and attention to the southwest region of Colorado as a destination for cultural history buffs seeking to understand the fascinating, multi-layered history of the area.